↓ Skip to Main Content
Home › Where are they now? › T › Chris Tracey 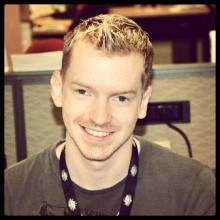 First job
When I graduated in 2009, I was in the same position as most students – poor and desperate for money. After applying to a bunch of media and PR jobs, I also threw my hat in the ring for a job with the Australian Bureau of Statistics at an entry level position. Thankfully, I landed this job and started in a data entry role for the Survey of Motor Vehicle Use – not the most glamorous of jobs but it paid the bills.

The story so far
After nine months of this, I was about ready to leave – numbers and surveys weren’t my thing – but out of the blue the Queensland Director for the National Census program approached me and asked if I’d like a job in Public Relations.

I jumped at this chance, and spent a year travelling the state, organising events, dealing with media, writing media releases and problem solving and crisis managing people and problems that arose during the project. This project took me from suburban Brisbane, to remote regional Queensland in Aboriginal communities and working with media from all across Queensland, as well as creating and designing a product suite and communications strategies to reach diverse groups of people from inner city dwellers to miners and tourists.

Following this project, I applied for a communications role at the ATO, as I was desperate to not go back to data entry. This work mainly involved product and communications design, but after a few months, I was seconded into some temporary work with a User Centred Design (UCD) team – a discipline that involves facilitating one on one interviews with participants to test products, services and to gauge their backgrounds and understanding of products.

The journalistic skills I learned shone in this situation and I loved working face to face with people to gain an understanding of how they tick, what their needs and wants are, and using this information to help inform and change the way the tax office talks with its end users.