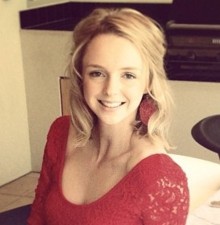 The story so far
I did work experience in as many television and radio stations as I could during my degree, which lead me to my first ‘real’ media job – the weekend researcher position at Channel 7’s Today Tonight during my third and final year of university. I gave up my weekend sleep-ins to this job for about a year, as well as doing casual shifts producing the 612 ABC Brisbane breakfast program.

When I graduated I landed my first full time job with Southern Cross Austereo as the radio journalist for Central Queensland and Mackay and the Whitsundays, based in Rockhampton. My time in commercial radio was a lot of fun despite the 3.30am alarm and a huge workload for a solo act covering an enormous patch of Queensland.

In 2013 I moved to work for ABC News in Townsville as a radio and television journalist, becoming the state’s youngest reporter at the time (I no longer hold that title!) It’s allowed me to cover everything from NRL to elections and experience the variety of life in the tropics.