↓ Skip to Main Content
Home › Where are they now? › H › Spencer Howson 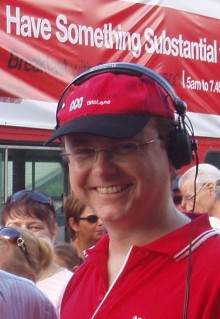 Degree
Studied Bachelor of Business (Communication) – Journalism between 1989 and 1991.

First job
Immediately after graduation, I went to the UK and worked in the BBC Radio Leicester newsroom. For one day. The pub down the road had a full-time job going and I needed the money.

But, after two and a half weeks pulling beers in a pub in Birmingham, I knew that Brisbane was home.

I applied for a job with ABC News in Brisbane, telling them I was an ex-BBC reporter! At the interview, when asked how long I’d been with the BBC, I said something like: “I think it was the 14th of December. I mean, it could have been the 15th. No, I’m pretty sure it was the 14th.”

I didn’t get the job.

The story so far
I spent a year working (one of two paid employees) for community radio station 4RPH (Radio for the Print Handicapped). The RPH stations (in most capital cities) are charged with reading the printed the word, eg newspapers, for those who are not able to do so themselves. This includes migrants who understand spoken but not written English, and people with varying degrees of vision-impairment.

I pushed the boundaries at 4RPH, introducing interviews in what had previously just been straight “reading” programmes. In 1993, we mounted a substantial federal election night special, with journalism students reporting in from various locations, and the demo tape formed the basis of my next ABC job application, producing and presenting at ABC Radio in Rockhampton. I started there in June 1993.

Initially I presented the Friday Breakfast show and assisted with general production around the station. Over the next two years, I produced and presented statewide morning current affairs and then a statewide afternoon magazine show.

Moving to Brisbane, I took over from Peter Dick as presenter of then 4QR (now 612 ABC Brisbane) Breakfast show, a position I held for four years.

Five years of afternoon radio followed, before I returned to the so-called “Cornflakes shift”. 2013 is my 12th year (8th consecutive) in the 612 Breakfast chair.