↓ Skip to Main Content
Home › Where are they now? › G › Brenton Garen 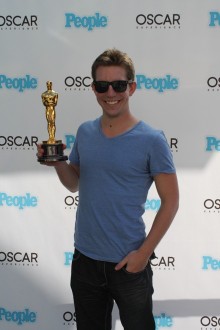 The story so far
My passion for journalism started back in 2004 when I began writing for a weekly youth produced supplement that was printed in The Queensland Times. At the time I was in my senior year at high school at Ipswich Grammar School. For almost a year, I wrote various pieces to build up a portfolio of printed work.

In 2005, I began as a freelance reporter for The Satellite newspaper, which had a circulation of 45,000 plus weekly on Brisbane’s westside. This gig coincided with my first year of Journalism at QUT. I covered community stories from Jindalee to Springfield Lakes for almost a year.

At the end of 2005, I began a work experience stint at The Queensland Times. For about three months, I worked three to four days a week over the summer, sometimes writing up to four or five stories a day.

In February 2006, my hard work paid off when I was offered a full time cadetship to work at the Ipswich Advertiser, a weekly publication produced out of The Queensland Times office in Ipswich. I reduced my QUT study load to three subjects a semester for the next three years so I could work full-time at the paper.

I was mentored by a great team of editors and fellow reporters. My writing improved significantly, which helped with all my QUT subjects through my last ever exam in October 2008. During my time at the Advertiser, I covered local politics, crime, business, sport, education, health, travel etc.

In December 2008, I resigned from the Ipswich Advertiser to take a much needed gap year after three years of full time work and study. I packed my bags and headed to the bright lights of Los Angeles.

Back in LA, I also produced a story for Today Tonight – following around a Melbourne musician who was nominated and performing at the LA Independent Music Awards.

Over at Channel 9 in Hollywood, I worked alongside bureau chief Robert Penfold. One of the freelance gigs I was assigned to was an interview with Donny Osmond and his Aussie dance partner Kym Johnson after a taping of an episode of Dancing with the Stars.

In 2010, I decided I wanted to continue my adventures in Los Angeles, so I applied to a handful of newspapers to find a new work visa so I could continue my stay. I was fortunate enough to be offered a full-time gig as Online Editor at the Beverly Hills Courier.

For about 18 months, I managed the website and produced news videos. Since the paper had a small staff, I also jumped in and wrote a lot of stories for the print edition as well. I regularly covered red carpet events, festivals on Rodeo Drive, and lapped up all the glitz and glam that the famous 90210 had to offer.

In August 2011, I came across an opening for the Editor-In-Chief position at the Santa Monica Mirror. I applied and was selected for the job out of a field of about 50 applicants.

Now I’m in charge of a freelance staff of about a dozen people – a combo of writers, columnists, photographers and occasional interns. I still write about half a dozen stories a week, but I’m mainly responsible for filling the weekly print edition that prints an average of 32 to 40 pages a week.

My career has moved forward in leaps and bounds, proving that with the right qualifications, passion and drive, QUT graduates can achieve whatever they want – whether it’s in Australia or on foreign soil.