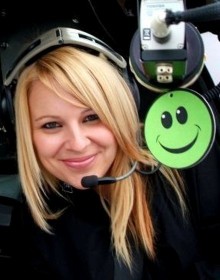 The story so far
Following my first gig at 2LM/ZZZ Lismore I moved back to Queensland to continue work as a journalist, this time at River 94.9 in Ipswich. I spent four years there eventually becoming news editor then left at the end of 2004 to travel overseas.

I lived in Edinburgh, Scotland, for two years bumming around in office jobs until I had enough money to take various holidays somewhere in Europe.

Upon my return to Australia I took up a position as journalist for 4BC Brisbane which involved field reporting, reading and of course writing news. I stayed at 4BC for about a year before commencing my current employment with the Australian Traffic Network.

My job involves spending two hours in a helicopter each morning flying over Brisbane and providing traffic broadcasts for both TV (Today Show, Channel 9) and radio (97.3 and River 94.9). I also do traffic crosses in the afternoon for Nova 106.9, 4KQ and Hot 91 on the Sunshine Coast.

Recently I’ve also started to provide various online news agencies with aerial photographs of any newsworthy incidents we fly over.