↓ Skip to Main Content
Home › Where are they now? › C › Adrian Crawford 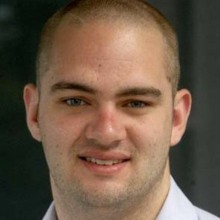 Story so far
I finished a Bachelor of Journalism at the end of 2005 but struggled to break into the industry in 2006. As I was preparing to concede defeat and head to England to see what Old Blighty had to offer, an opportunity to join the ABC’s News Online team arose through a tutor at QUT.

I applied and was offered a three-month fixed term engagement, which was the perfect reason to hand in my resignation at Myer.

I secured a full-time journalist/producer role with News Online 12 months later before transitioning to the sports desk in late 2009, where I’ve been ever since.

In 2010 I went back to where it all began when I joined the sessional academic staff at QUT where I tutored core journalism units.

In August 2013 I won permanent residency in the United States and eventually moved to Augusta, Maine, where I took a role as night web editor and fortnightly columnist with the Kennebec Journal and Morning Sentinel newspapers.