Produced for online by Leia Comegna 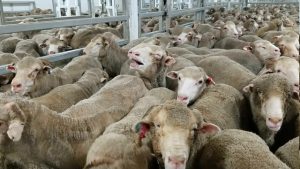 The live-export trade is still in damage control after footage of 2000 sheep dying on their way to the Middle East was released.

Emmanual Exports managing director Graham Daws whose vessel featured in the footage, has told the ABC there is no one to blame for this type of incident.

“It was a catastrophic event. It’s distressed everybody. The footage of it is confronting and it was out of anybody’s hands. There is nobody to blame for what happened. Although there is a lot of people trying to blame our company and us but it can not possibly happen again,” says Daws.

He admits, however, it does not look good, and says no one in the supply chain wants to see it happen again.

“So all sheep will be more then comfortable. They will all be able to eat, drink and lie down as they always can but there will be extra space on the ship,” says Daws.

But Vets Against Live Exports spokesperson Dr Sue Foster says the industry’s claim of the voyage being a single freak accident was blatantly incorrect.

“One important point because it seems to be lost now, is that the very bad footage that we saw was actually a compilations of videos from five voyages not just one voyage,” says Foster.

Foster continues on by saying it is not a one off. It happens pretty much to a degree, in every voyage across the Middle East we suspect.

Dr Foster says merino sheep start to overheat at 27 degrees. She says even though the organisation supports the gradual phasing out of the live-trade to protect farmers, they think the live-trade in the Middle East summer needs to be stopped immediately.

The Stop Live Exports group held a rally at the Fremantle docks over the weekend, Campaign manager Katrina Love says the sheep and cattle trade to the Middle East has always had problems.

“A trade that’s always been problematic in that the voyages are very long. They often are going from Australian winters into northern hemispheres summers. Every element of the supply to the Middle East is problematic,” says Love.

Ms Love says she knew sheep and cattle were still suffering within the trade, yet the extent, duration and number of stock lost still managed to surprise her. She says there were even producers within the industry shocked to see what was happening.

“I’ve been doing this for about 12 years. I’ve seen absolutely everything you can possibly see in relation to live export. I saw some raw and uncut footage that was going to be shown on 60 Minutes and even I was shocked at what I was seeing. Its stuff that you would expect to be seeing the 80s and 90s,” says Love.

She says the 2011 Indonesian cases of cattle mistreatment prompted a massive amount of investment into training and monitoring of the markets into South-East Asia.

She says the sheep industry has not had its own large-scale scandal yet.

“All though it is common that sheep and cattle go on the same ships. I think cattle are given more room per animal and looked after better. Some companies are worse the others and some ships are worse than others. So if you get one of the worst companies using some of the older ships, It is just a recipe for disaster,” says Love.