You might not be able to hear termites devastating your walls, but a new app developed on the Gold Coast can.

The Termite Buster app allows people to listen in on the insects with the microphone in a smart phone. 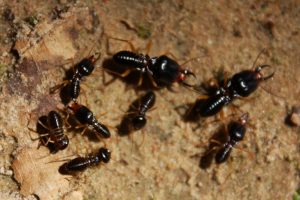 Termite Buster co-founder, Chris Quirk, says the idea was developed when he came across a study saying termites bang their heads as a warning mechanism.

“That sound, which sounds a lot like pouring milk over rice bubbles, is actually a unique frequency, and so we worked out how we could build an app that would detect that sound and analyse it and work out whether it’s termites,” he says.

Mr Quirk says the app guides people through the termite problem areas, advising people to bang on the wall and place the phone where its microphone can record the response.

“Then what you do is analyse the recordings, it sends the recordings off to our server and analyses them, it works out whether the sound pattern and the frequency is the same as the recordings that we have for termites,” he says.

Gold Coast entomologist Ion Staunton, was involved in the four-year testing period and says a big need exists for an app such as this, because of the extensive damage termites cause in homes every year.

“Over many years, they can pretty much destroy the integrity and the strength of the timbers within the home, and a lot of this can be done before anybody notices,” he says.

For the app to work, he says, it is important for people to use it correctly.

“It’ll always work, but that doesn’t mean to say that a home-owner who might not hold the phone correctly or doesn’t do the process correctly, they might get a non-reading when there were termites there,” he says.

The Termite Man Pest Control manager Joshua Stephen, says the app is a good development for home owners who need an urgent indication on termites, but says people should not fully rely on it.

“When it comes to termites, it’s not worth relying on an app that may or may not work, you’re better off just getting a professional in who can come and assess with the correct tools, and address the problem if needed,” he says.

He says people can also detect the wall-eating insects by looking for any sort of abnormality on their walls.

“That can be little brown spots on the wall, it can be mould patches, the more obvious sign is obviously bubbles in your timber architraves and then when blinds and doors are falling off walls.”

If you do decide to go the hi-tech route, the app will cost $10.