A new music program aimed at helping country kids get a break in the music industry has been launched in Brisbane. 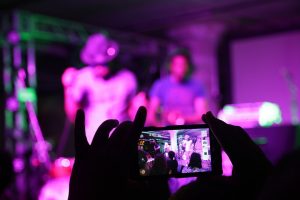 Ten lucky young musicians are headed for the stars, after being selected for the Big Sky Girls recording program.

Partnered with Sony and APRA, each young woman will be given the opportunity to perform and record their own songs, guided by an industry professional.

The rate of female song writers is 20 per cent less than males in Queensland, and program organiser and director Deb Suckling, is determined to change those numbers.

She says it is hard for aspiring musicians in regional areas to gain access to recording opportunities and make their mark in the music industry, and the program’s aimed at correcting that.

“We come to Brisbane over a period of six months, they have creative workshops in song-writing and other various aspects of the music industry as well, they get paired-up with their mentors and they have those few months on Skype, on their phones on FaceTime working on their creative material with their mentor,” she says.

She says it is important to help young women develop their skills and confidence in defining individual music style.

“A lot of this program is very much about finding your own voice and your own style and where you kind of sit with your individualism,” she says.

Mentor and musician Roz Pappalaro, is blown away by the young talent evolving and thoroughly enjoys working with her protégé, Jamison Kehl.

“I am getting as much out of this process as what I hope the mentee is getting.

Each aspiring artist has daily contact with their mentor and is writing and producing a new song each week.

Kehl, 16, says being chosen as a Sky Girl has been an exciting honour and opened many doors for her career.

“The music industry is definitely a career; a lot of people out there will say that it’s not a real job, it most definitely is and it’s hard work,” she says.

She hopes that with the growth of Big Sky Girls, it will encourage young girls everywhere to chase their music dreams.

Big Sky Girls and their mentors, will be performing at the Brisbane Powerhouse on July 2 and their EPs will be released later this year.