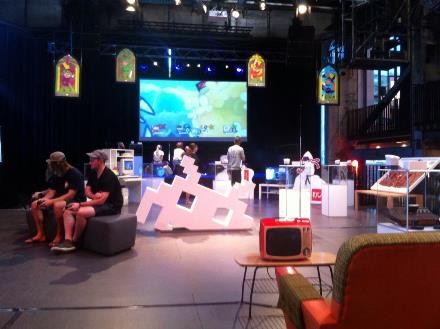 The Brisbane Powerhouse will play host to the IRL (In Real Life) Digital Festival and display a convergence of electronics and art for the next ten days.

The event will feature interactive art and video game exhibits and will be used as an opportunity to showcase Brisbane based designers, artists and developers.

Other attractions include digitally inspired music events, a giant installation which imitates a power station and virtual reality experiences.

Brisbane Powerhouse artistic director Kris Stewart says the venue was the ‘perfect’ place to host a festival of this kind.

“What we try and do is be really contemporary and modern, we like to be very Brisbane in this moment in history,” he said.

“We’re not a museum that’s really backward looking, we are really modern and focused on the future.

“It allows us to kind of do things like this that maybe would be odd anywhere else.”

He says the festival was truly unique to a place like Brisbane.

“You have things like Supanova and other pop culture conventions and there’s been a few interactive conferences and stuff that’s been a bit more industry focused,” he said.

“For something that ranges from things like video games all the way through  to Tom Thum and the Queensland Symphony Orchestra doing a beat boxing orchestra event through to coming to experience virtual reality technology.

“I don’t think there’s ever been anything like that before.”

Artist Tully Arnot, whose piece ‘Meadow’ features at the festival, says the event was all about the ‘relationship between digital existence and reality.’

“So to me the work that I created is trying to translate digital rendering of grass that you’d see on screen or on a video game or something turning it into something real,” he said.

“Physically the work is just made out of off the shelf solar display panels which have straw attached recreating this kind of hyper real sort of fluorescent green swaying grasses.”

He says to be given an opportunity to showcase his work in such an accessible way is rare.

“It’s great because having access to a place this big doesn’t come along very much and having the support of the festival like this is really helpful,” he said.

Developer Warren Armstrong, who designed the software ‘The Drawing Room’ for the virtual reality headset Oculus Rift, says it is brilliant to have the chance to showcase technology many people have never seen before.

“I pretty much developed it specifically for IRL,” he said.

“It’s wonderful to have the opportunity to do this and it’s great to be able to show off what you can actually do with the technology.”

Mr Stewart says he hopes a successful festival will be the start of a new trend in Brisbane.

“I’m looking at this as a real kind of proof of concept that it really suits Brisbane, that audiences love it,” he said.

“Gaming and contemporary music is stuff that we do better than anyone and I think us having our own version of South by Southwest (festival) would be a fantastic thing to have here.”

IRL Digital Media Festival runs at the Brisbane Powerhouse from May 7 to 17.