Written by Lewis Wiseman
Edited for online by Lochy McIvor 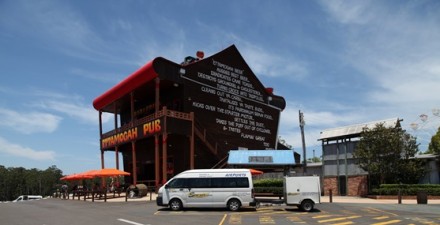 The next phase in the upgrade for the Bruce Highway on the Sunshine Coast is expected to cause significant damage to more than one Australian icon.

Queensland’s Department of Main Roads has announced it will close the on and off ramps to Aussie World and surrounding businesses during the next phase of roadwork on the Bruce Highway.

Under the plans, motorists would have to use a yet-to-be built western bypass to visit the fun park, what was known as the Ettamogah Pub and the 18 surrounding local businesses.

Aussie World Garage owner Steve Amos says the project will take a huge part of his business away indefinitely with the new bypass having no finish date as of yet.

“As far as we’re concerned removing direct access from the Bruce Highway to our business will be very detrimental regardless what business it is in this area,” he said.

Mr Amos has started a petition which now has more than 7,000 signatures calling for the Government to find a better way to manage the construction.

“Every single person that has signed that petition has expressed their shock and outrage at the fact that Transport and Main Roads would want to destroy a local business,” he said.

The department says the planned upgrades are necessary as it will make the on and off ramps safer.

The plan potentially will also clear 25 hectares of nearby forest.

“There has been revised plans and things like that but it’s still, at this point in time, just not acceptable to keep clearing,” she said.

She says the area is home to a population of koalas and they have asked the Government to ensure the habitat remains intact.

Ms McCarthy says there are other, less detrimental options for this highway upgrade.

“There is opportunity to actually rethink this design so it doesn’t have the impacts that it does,” she said.

“It needs to avoid the forest and it needs to have a better outcome overall.”

Member for Caloundra Mark McArdle says the closure of access to Aussie World is not necessary.

“I have been advised by engineers that there are options to look at other alternates, opposed to simply closing the on and off ramps and leaving access to these business by, what I would call, an indirect, time-consuming and economically-destructive method,” he said.

“It will mean economic ruin for the businesses who rely upon the passing traffic who currently use the off-ramps to get to these businesses.

“I have written to the Minister for Main Roads Mark Bailey and asked that the current plans for the Bruce Highway Upgrade project be reconsidered urgently.”