Edited for online by Paige Hasaballah

The economic divide between Brisbane’s north and south sides has widened significantly over the past decade, according to a new productivity report.

Analysts at the Grattan Institute have created maps of Brisbane which show the city has enjoyed significant growth since the 1991 census, with median incomes and university education rates improving overall. 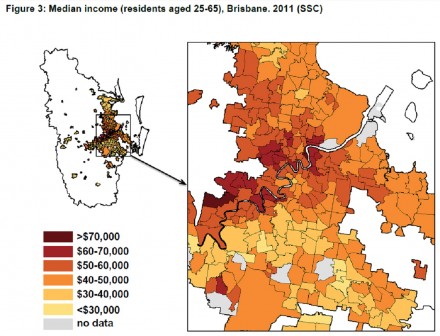 But the overall improvement in rates of wealth and education has not been evenly distributed.

The maps reveal residents on the northern side of the Brisbane River have been better paid and have achieved higher levels of learning than those on the south since 1996.

Co-author Peter Mayors said the report considers how well the city meets the needs of the economy by taking into consideration the city’s transport infrastructure, quality of education and economic stability.

“We’re seeing an evermore knowledge intensive economy in Australia and we need to make sure that the city works to support that economy,” he said.

Mr Mayors said the river seems to be the dividing line for higher and lower level incomes and qualifications in Brisbane.

One of the reports key findings focussed on Brisbane’s transport network and highlighted almost all services offered more options to the north side as opposed to the south side.

“We need a better connected city in terms of transport, that means among other things, investment in public transport,” he said.

“There is lots of evidence toprove that Brisbane’s rail network is very close to capacity and will reach capacity at 2016, so there has been research to suggest that Brisbane needs to invest in new rail links.”

An English teacher on Brisbane’s south side, Hazel McGrae, said funding cuts to education will result in more school closures on the south side which will continue the downward spiral in the education system.

“We need further investment in education on Brisbane’s south side so students will be better equipped for the work place and break the cycle of lower income jobs,” she said.

“If we can work positively on the cause of this issue the effect has to also be positive.”